Viral Hepatitis is a serious threat to global health. Hepatitis B (HBV) and C (HCV) viruses spread from person to person through blood and other bodily fluids. Hepatitis transmission is an especially big problem in Asian and African countries. Poor infection control in hospitals and inadequate screening of the blood supply allow the virus to spread virtually unchecked. Hepatitis is also a significant health problem for developed countries, including the United States.

Once inside the body, hepatitis launches a stealthy attack on the liver. Silently and without symptoms, these viral infections inflame and scar the liver, eventually leading to severe scarring (cirrhosis) and liver cancer. The lack of outward signs, combined with a lack of knowledge about the disease among the public and doctors, and poor access to screening tests, is why only one in ten people with hepatitis know they’ve been infected (WHO).

It is possible to eliminate viral hepatitis as a public health threat. Highly effective, and cost-effective interventions are available to prevent transmission of the virus, diagnose infections before people become ill, prevent and treat HBV, and cure HCV to prevent premature deaths.

In 2016, the World Health Organization (WHO) set the ambitious goal of eliminating viral hepatitis as a public health problem by 2030. The organization’s aim is to reduce hepatitis transmission by 95 percent, and deaths by 65 percent. Achieving these goals by 2030 will prevent 7 million deaths from viral hepatitis. Dramatic improvements in treatment over the last few years have made this once impossible goal realistic. Thanks to new antiviral drugs, over 95 percent of people with hepatitis C can be cured within three months of starting treatment and the first-ever cancer preventing vaccine can prevent hepatitis B.

In the spring of 2018, John Ward, MD, a senior scientist at the U.S. Centers for Disease Control and Prevention (CDC), came to The Task Force for Global Health to develop a viral hepatitis elimination initiative called the Coalition for Global Hepatitis Elimination. Under Ward’s direction, and in collaboration with the World Health Organization (WHO), the Centers for Disease Control and Prevention (CDC), and other partners, the Coalition was born.

The Coalition is a collaborative approach to help countries prevent, screen for, and treat hepatitis B and C. The program will bring together a coalition of stakeholders committed to helping developing countries analyze the scope of their problem, create and implement a plan for combatting hepatitis, and then evaluate its success. In creating this program, the Coalition will leverage best practices of other Task Force programs that have expertise in building and nurturing a collaborative mechanism including the Coalition for Operational Research in Neglected Tropical Diseases (COR-NTD) and TEPHINET—a network of epidemiology training programs in 100 countries.

The aim of the Coalition for Global Hepatitis Elimination is to build a “community of practice around viral elimination.” Experts from around the globe will share the evidence-based information they’ve gathered while working on successful virus elimination programs to help at-risk countries create their own solutions. The program is centered around five main axes:

To create a truly global movement, all of the information gathered will be made available in one central repository—www.globalhep.org. Its audience will include Coalition members working on viral hepatitis prevention, care, treatment, and elimination.

To achieve its goals, the Coalition will rely on a number of financial and technical partners. Nonprofit sector partnerships include organizations such as the Clinton Health Access Initiative, which provides low-cost medications to the developing world, as well as Partners in Health, WHO, and the CDC. A number of private sector partners including industry and foundations are providing financial support to the Coalition.

The Task Force has signed up several countries to join the Coalition, including Mongolia, Georgia, Egypt, Iceland, Switzerland, the United States, Japan, Australia, and Rwanda. The hope is that all national elimination programs will eventually join the network.

TEPHINET, a network of field epidemiology training programs based at The Task Force, works with countries in Europe and the Middle East to support the implementation of prevention and intervention strategies for viral hepatitis. TEPHINET manages and supports Infectious Disease Detection, Prevention, and Elimination projects, including providing Support for Hepatitis C Elimination in Georgia, developing Best Practices for Hepatitis C Virus Elimination, and Viral Hepatitis Prevention and Control in Pakistan. 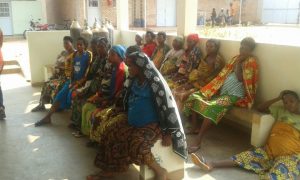 Protecting African Newborns from Hepatitis B

Hepatitis Can Be Eliminated, Help Us Do It!

To see where we work on Viral Hepatitis, click here.

Header photo caption: A teacher in Pakistan explains to his students what hepatitis is and how it affects your liver.