Trachoma is a painful eye disease and the world’s leading infectious cause of blindness. This neglected tropical disease (NTD) is caused by a bacteria found naturally in the environment that is spread by flies and person-to-person contact in communities with poor sanitation and hygiene.

In the past 20 years, remarkable progress has been made in the fight to eliminate trachoma as a public health problem, with a 91 percent reduction in the number of people burdened by the disease worldwide (ICTC). This progress is the result of the implementation of a comprehensive elimination strategy called SAFE: Surgery, Antibiotics, Facial Cleanliness, Environmental Improvements.

In support of trachoma elimination programs, ITI manages Pfizer’s donation of the antibiotic Zithromax® (azithromycin). To date, Pfizer has donated more than 876 million doses of Zithromax® to ITI that have benefitted a total of 40 countries. ITI ensures transparency and accountability in the supply chain through its online system, the Zithromax Shipment Tracker, that allows stakeholders to monitor the distribution of antibiotics from Pfizer’s manufacturing facilities to countries. ITI’s stewardship of antibiotic donations includes serving as the secretariat for the Trachoma Expert Committee (TEC), an independent body of internationally recognized experts that meets twice annually to review country applications for donations of the antibiotic Zithromax®. The TEC also advises ITI on strategic, technical, and operational issues.

ITI provides technical assistance to country partners at the national and local levels in implementing mass drug administration (MDA) of antibiotic. This support includes the development of free massive open online courses or MOOCs that connect program planners and implementers around the world with the latest resources, policy updates, and best practices in trachoma elimination.

Countries and implementing partners need accurate data about where trachoma is found. From 2012-16, ITI and its partners used sophisticated mobile technologies to create a map of trachoma prevalence worldwide. The Global Trachoma Mapping Project (GTMP) was the largest infectious disease survey ever undertaken. In 2016, the World Health Organization built on the success of GTMP to launch Tropical Data, a mapping project for all NTDs.

A major challenge for trachoma elimination programs is determining when to stop MDA. Among other projects, The Task Force’s Neglected Tropical Diseases Support Center develops diagnostics and tools to assess whether trachoma has been eliminated as a public health problem within populations. 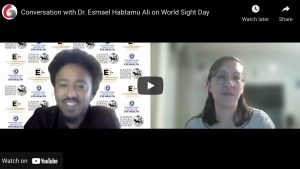 Help Us Eliminate This Cause of Blindness!

To find where we work on trachoma, click here.

In 2018, Ghana became the first sub-Saharan African country to eliminate trachoma. Of the 37 countries where trachoma is endemic, 22 are in Africa.

Header photo caption: An individual in Amahara region, Ethiopia gets their eyes checked to see if they have signs of trachoma.