The last time The Task Force moved into a new building, George W. Bush was president and it had seven programs and 40 employees. Ten years later, The Task Force’s extraordinary growth of programs and staff have spurred its move to a new headquarters – one that is three times larger and can accommodate its vision to become a global health center in Atlanta.

The six-story building in Decatur, GA, is illustrative of how far The Task Force has come since its 1984 beginnings as a three-member operation that was set up to disband after solving one health problem – raising immunization rates of children around the world. It was so successful in that endeavor that it evolved into a permanent organization working on an array of global health issues.

Task Force Chief Financial Officer Dan Martins, MBA, said that the new office is his third since he joined the organization in 2005. “The Task Force has redefined the meaning of the word task force. We are here to stay and grow,” he said.

Purchased from Dekalb County, the 330 W. Ponce de Leon Ave. facility houses about half of The Task Force’s staff and programs. Three programs will remain at the former headquarters on Swanton Way – located just a few hundred feet away from the new offices – until the new building can be fully renovated. The Task Force is renting three floors of the Ponce facility to DeKalb County for a period of up to four years.

The 30-year-old building required a major overhaul before Task Force employees could move in including a new building exterior, elevators, and heating and air-conditioning systems. It was also updated to be LEED-certified, meeting environmental requirements for energy usage and environmentally friendly products.

When fully renovated, the 90,000-square-foot facility will meet existing and anticipated program needs for a decade or more, and accommodate up to 375 employees. The Task Force now employs around 130 people, having added 20 new positions annually since 2014.

The renovated floors were designed with a combination of open and closed spaces and made heavy use of glass partitions to allow natural light to flow.

“We want visitors to walk into the space and feel that meaningful work is being done here,” said Rob Meleski of Warner Summers, the Atlanta-based architecture and interior design firm that oversaw the project. “It needs to feel current and exciting while still allowing the focus to remain on The Task Force mission, history, and goals for the future.”

Meleski and his colleague, Lisa Vanderloo, drew on staff input to ensure the space was designed to support program needs. In addition to extensive surveys, several staff committees were formed to provide input on all phases of the renovation from the design of offices to the selection of materials for furniture.

A driving theme behind the design was to ensure that the new space supports The Task Force’s culture of collaboration. Among the features are casual meeting spaces that allow for informal staff gatherings. Conference rooms are equipped with the latest audiovisual technology to enable both in-person and remote meetings.

Martins said he likes the way his office opens out to the area where his team is housed. “The layout is helpful to interact with my colleagues and the open spaces allow for quick meetings at someone’s desk,” he said,

Over the years, The Task Force has built a reputation of being able to bring together stakeholders, remove roadblocks and marshal the work of partners to solve some of the world’s most challenging global health problems. The new headquarters strengthens the role of neutral convener by featuring a state-of-the-art conference center on the ground level that can accommodate up to 200 people.

The new headquarters will allow The Task Force to reach the goals outlined in a new five-year strategic framework that includes supporting the elimination of three neglected tropical diseases (NTDs), eradicating polio, and strengthening global preparedness for influenza pandemics. The Task Force recently launched a new partnership to eliminate leprosy and is exploring a programmatic initiative in viral hepatitis.

“Our new headquarters will give us the means to increase the impact of our existing programs, launch new programs, and recruit the best talent in global health,” said Dave Ross, ScD, The Task Force’s president and chief executive officer.

Ross said the new facility will provide an opportunity for The Task Force to develop a new center for global health in metro Atlanta. After the remaining floors are renovated, The Task Force expects to have space available to host other public health nonprofits that could potentially become new partners for the organization.

That vision is already coming to life in The Task Force’s Swanton Way facility. The National Association of Chronic Disease Directors (NACDD) occupies one floor of the facility. NACDD CEO John Robitscher, MPH, said the co-location provides tremendous opportunity to exchange best practices and potentially partner with The Task Force on new initiatives in the emerging global chronic disease space.

The purchase and renovation of three floors of the Ponce facility was made possible by the generous support of donors including a $10-million grant from Robert W. Woodruff Foundation and more than $2 million gifts from the Conrad N. Hilton Foundation, Pittulloch Foundation, and Mary and Wendell Reilly.

The Task Force is seeking an additional $6 million in philanthropic support to renovate the remaining three floors of the Ponce facility. Naming opportunities are available on all floors, the conference facility, conference rooms and the building itself.

Blog: Building on the Task Force’s Legacy of Collaboration 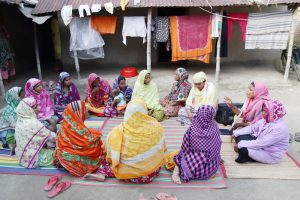