“At this point, we can fairly confidently say there is a strong – and probably a causal relationship – between Zika and GBS,” said James Sejvar, MD, neuroepidemiologist and lead project investigator with the Centers for Disease Control and Prevention (CDC).

Zika infection during pregnancy is known to cause severe birth defects, but the link to neurological issues in children and adults with the infection is not well understood.

GBS is a condition in which the immune system attacks nerve cells, causing muscle weakness, paralysis, and in some cases, death. Although rare, it had previously been associated with viral infections such as chikungunya and dengue.

CDC first became concerned that Zika may cause GBS in 2013 after receiving reports of an unusually high number of GBS cases in French Polynesia, which was also dealing with Zika at the time. More spikes in GBS cases were later reported in regions of Latin America that were also experiencing large Zika outbreaks, prompting CDC to begin a follow up of the long-term health effects of the disease.

“We are assessing these GBS patients between one and one-and-a-half years after their initial acute illness,” said Sejvar. “As far as I know, this is the largest and longest-running investigation of the long-term effects of Zika.”

TEPHINET, which supports field epidemiology training programs (FETP) around the world, was asked to join the project in Colombia where they provided investigation and surveillance expertise as well as logistical oversight and project management.

In Colombia, TEPHINET drew on the country’s FETP to collaborate with Diana Marcela Walteros, MD, who led the country’s GBS study. Walteros, who also works with the country’s National Institute of Health (INS), partnered with her colleagues in the northern part of the country to interview patients and review more than 160 medical records of patients with suspected cases of Zika infection and GBS that were reported through the national surveillance system.

TEPHINET Project Manager Mariana Mansur, PhD, said that the involvement of Colombia’s field epidemiologists in this study was crucial to understanding the relationship between Zika and GBS.

GBS can affect the nerves controlling breathing muscles and cause respiratory failure in up to 20 percent of cases. Mechanical ventilation is often needed until these patients recover.

In Colombia, field epidemiologists were surprised to find that more GBS patients than they had expected had been admitted to the intensive care unit and put on mechanical ventilation.

“At first, we were scratching our heads because we would expect only about 20-30 percent of GBS patients would be admitted to the ICU because of respiratory problems,” said Sejvar. “But what we found out was that doctors were prophylactically putting them on mechanical ventilation in case they had respiratory illness or failure.”

CDC investigators are continuing to explore the links between Zika and other neurological illnesses such as encephalitis, meningitis, and myelitis.

The project team expects to submit a manuscript about their GBS findings later this year.

This article was made possible through support provided by the Office of Infectious Diseases, Bureau for Global Health, U.S. Agency for International Development, under the terms of an Interagency Agreement with CDC. The opinions expressed herein are those of the author(s) and do not necessarily reflect the views of the U.S. Agency for International Development.

The Task Force Collaborates with CDC on Global Zika Response

The 148th Session of the World Health Organization’s Executive Board 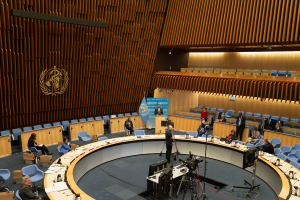