Joining Forces to Fight Disease in Latin America: Q&A with Mundo Sano and The Task Force

The Task Force and Mundo Sano Foundation, a family foundation based in Spain and Argentina that works to transform the lives of people affected with neglected diseases, have joined forces to fight diseases in Latin America, signing an agreement earlier in 2021 to strengthen capacities in the region.

Their goal is to contribute to disease elimination goals set by the Pan-American Health Organization (PAHO, the Americas regional office for the World Health Organization) for 30 communicable diseases and related conditions in Latin America and the Caribbean by the year 2030. Six months ago, The Task Force and PAHO signed an agreement to accelerate disease elimination efforts among PAHO’s member states. Together, these two agreements position The Task Force and its partners in Latin America to work together towards ending communicable infections like Neglected Tropical Diseases (NTDs) and to spur public health innovations, such as new drugs, diagnostic tests or vaccines.

Why do you think this partnership will be valuable?

Lammie: This partnership has been an ongoing conversation as NTD-SC and other Task Force programs have interacted with Mundo Sano because we have a lot of similarities in the way we approach health challenges and especially in our research models which emphasize work with local partners and governments. For NTD-SC, we know there is an important gap in our portfolio because we support very few projects in the Western hemisphere, so developing a partnership with Mundo Sano which has incredible reach and is driving innovation across the region will help us better achieve our efforts to eliminate NTDs by 2030. Additionally, although Mundo Sano and NTD-SC both have a principal interest in NTDs, Mundo Sano also has a focus beyond NTDs, including developing epidemiologic capacity and disease surveillance within health systems, so it became clear that there was potential for collaboration with many of The Task Force’s programs.

Abril: As Pat mentioned, we are eager to maximize our partnership with The Task Force to increase our capacity to help transform the lives of people affected by neglected diseases. Founded in Argentina and focusing much of our work in Latin America, we see this partnership also as an opportunity to facilitate The Task Force’s contributions to solving health challenges in this hemisphere.

Cañón: It is true that Latin America has made progress in beating NTDs and that many countries in the region have received recognition from PAHO or WHO for successful disease elimination, but unfortunately, we still see the toll they are taking on many communities in this region. I recall the words of our founder Dr. Roberto Gold. He says that “NTDs are a debt that countries have with themselves because they are preventable diseases that tend to happen in context of poverty.” We know they can be avoided, but there are systemic reasons, particularly in Latin America, why these diseases are still very common in this region. So the unfairness of having them still being a burden for communities is one of the biggest reasons we need to tackle these diseases.

Abril: What my colleague is talking about is that Latin America is not the poorest region in the world, but it is a region with the most acute inequities. Often, data doesn’t show the reality because in overall health numbers, many Latin American countries have good general health metrics, but those numbers are leaving many people living in remote villages behind. One day you can be in a theater in a very developed city like Buenos Aires, but then hours later you could be in a village in the forest of Argentina that provides an example of  the most extreme example of poverty. I think this is one of the most important conditions of Latin America, and it is difficult to bring it to light because not only does the rest of the world not see it but even many Latin Americans don’t see it. And as my colleague mentioned, NTDs are diseases of poverty, so they are primarily affecting these communities that are being ignored.

The human rights perspective of health has been emphasized in Latin America and has been critical to the public health movement in the region. What is unique about the region’s approach to emphasizing health as a human right and how will it shape this partnership’s efforts?

Lammie: That health as a human right is a very important perspective for all of us to have and this collaboration will help The Task Force keep that perspective at the forefront of our activities. At least for some NTDs in the Western hemisphere, these are a legacy of the slave trade, so where you see NTDs concentrated, particularly in Afro-descendent populations, PAHO has always emphasized that we should be focused on redressing the historical legacy of slavery in these populations. We see these diseases concentrated in poor populations because these people are marginalized by society. So eliminating these diseases means making marginalized people full members of society and making their access to health care and healthy lives an inalienable right.

Abril: Latin American countries are different from African countries because in Latin America, the situation is not the lack of capacity or resources to attend to the health of the people, but there is a disconnect between the affected people and the resources and capacities. The people who have education and power are the ones who have access to health services but the people lacking education, living in impoverished situations don’t have access to health services and they’re the ones who need them most because they’re at risk of diseases like NTDs.

Cañón: Following up on what Marcelo said, I think that one of the things Mundo Sano focuses on is making people understand that exercising the right to health or access to health is an exercise of empowerment. In a lot of communities, people are not aware that they do have a right to get a diagnosis or a treatment on a condition, so a model that we operate on is to empower people on the exercise of human rights in the context of the significant inequities in the areas of health.

How is this partnership going to support disease elimination efforts in Latin America to address health inequities?

Abril: The WHO has developed a new roadmap to 2030 for NTDs and The Task Force and Mundo Sano are institutions that have shared values and share a commitment to using this roadmap as our guide to eliminate NTDs. For example, both institutions see the importance of coordinating and working with the national health systems in countries where NTDs are endemic. As private organizations, we have the ability to think free of the limitations that governments and public institutions may have, but along with this freedom, we still want to develop solutions that are in line with the guidance and plans of national health systems and their public health institutions so that the countries can take ownership of solutions to the challenges that NTD programs face in their communities. In this line, when we work in the development of innovative approaches we have in mind the municipalities scale, because the problems are global but the solutions need to be applied locally.

Lammie: There are several domains here that will be very important. In terms of drug development, Mundo Sano’s current work through the drug development sector of the Insud Pharm Group has really focused on innovation around bringing new drugs to market that have the potential for increased efficacy for soil-transmitted helminths, also known as intestinal worms. Increasing access to these products will allow an expansion of NTD programs beyond the diseases that are the focus of the current drug donation programs. In addition, for all of the NTD programs, the way that we use information is rapidly evolving. Through the work that Mundo Sano is doing on dengue and Chagas, two other important tropical diseases, we see new opportunities to strengthen Ministries of Health to address other neglected diseases. There is a real opportunity for collaboration to scale up the intervention strategies that have been developed through the research that Mundo Sano has supported.

Header photo: A woman in Limbé, Haiti looks on as health workers go door-to-door in her community to test for lymphatic filariasis – a parasitic disease transmitted by mosquitoes – as a public health problem in Haiti. Photo credit: Bill Weeks 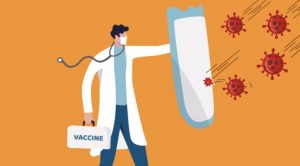 In the first year of the pandemic, nearly 30 million Americans were diagnosed with COVID-19