The Task Force for Global Health has been named the recipient of the 2016 Conrad N. Hilton Humanitarian Prize—the world’s largest humanitarian prize–for its extraordinary contributions to alleviating human suffering.

Over the course of its 32-year history, The Task Force has used a powerful collaborative model to help address a broad array of large-scale health issues primarily affecting the world’s poor. Much of its work has focused on increasing access to essential vaccines and medicines, as well as controlling and eliminating neglected tropical diseases. Today, its eight programs reach populations in 151 countries.

“We have long believed collaboration is essential to solving large-scale health problems,” said Dave Ross, ScD, president and chief executive officer of The Task Force. “No one organization has the resources or expertise to address these issues. It is through our partnerships that we have been able to have an extraordinary collective impact.”

The Hilton Prize includes $2 million in unrestricted funds that The Task Force will use to acquire a larger headquarters in Decatur, GA, to support existing programmatic needs and a new initiative in noncommunicable diseases. The Task Force is launching a $15-million capital campaign to acquire this facility.

A distinguished panel of international jurors selected The Task Force for the Prize following an extensive evaluation. The Task Force joins 20 former laureates, including global health organizations Partners In Health, PATH, and Doctors Without Borders.

“The Task Force is about compassion, collaboration, and smart solutions,” said Hilton Foundation President and Chief Executive Officer (CEO) Peter Laugharn. “The organization and its partners roll up their sleeves and solve massive global health problems, and they do it without fanfare. This is an organization that, with its partners, is on track to help eliminate three diseases in the next decade. That is something we should all celebrate.”

The Task Force will officially receive the Prize at a Sept. 30 symposium in New York City titled “The Future of Humanitarian Action” that will examine the ongoing refugee crisis. The symposium will feature a panel discussion about The Task Force’s collaborative model with Task Force founder Bill Foege, MD, MPH, Roy Vagelos, MD, former CEO of Merck, and others. Dr. Vagelos is credited with starting a movement called pharmacophilanthropy when he committed in 1987 to donating the drug Mectizan for “as long as needed” to eliminate river blindness. The Mectizan Donation Program is based at The Task Force. 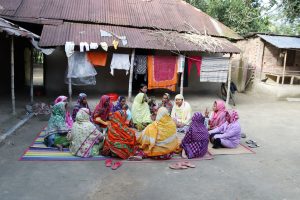 This article was originally published on Medium. One billion. It can be difficult to conceptualize

The Epidemiology of Compassion and Love: In the DNA of the NTD Movement

On January 8-10 2020, the Focus Area for Compassion and Ethics (FACE) convened a meeting at