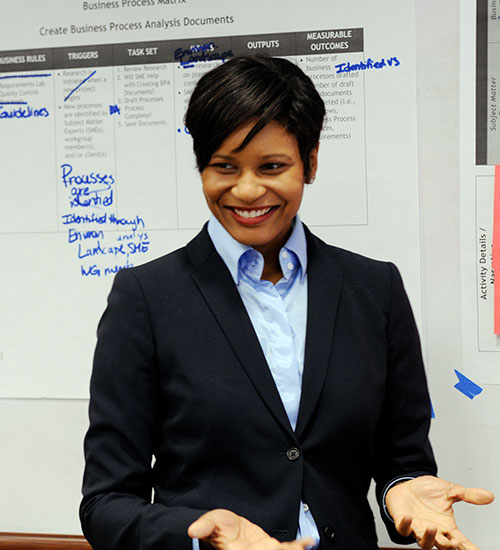 Number crunching might seem better suited to a big corporation than to a nonprofit organization devoted to improving global health. Yet data is at the “epicenter” of The Task Force for Global Health’s mission, says Vivian Singletary, director of its Public Health Informatics Institute (PHII).

“Information, whether it’s on disease burden, surveillance, or outcomes, informs interventions,” she says. “Without it, it’s very difficult to be precise about deploying people, drugs, vaccinations, or whatever else is necessary to bring the greatest benefit to the most people possible.”

Singletary understood the power of data long before her entry into global health, from her undergraduate training in industrial and systems engineering at Georgia Tech, to the various management roles she held at Corning, Mars, and The Home Depot. Her background was in process improvement and information system development and implementation.

She brought her experience to The Task Force in 2009, when she joined the International Trachoma Initiative (ITI) as its Global Supply Chain Manager. Just the second employee to be hired after ITI came under The Task Force’s umbrella, Singletary’s first job was to create a more transparent application procedure, and a more streamlined approval process for countries needing Zithromax donations.

After two years of working at ITI, she yearned to expand her knowledge about public health. “I had this great skill set, but after so many years in corporate America, I was feeling empty. What attracted me to public health was the mission,” she recalls. “PHII posted a job that perfectly fit my background, and I ended up moving into the position of Global Health Public Analyst.”

Using Data to Discover the Cause of Child Deaths

One of PHII’s key partnerships is the Child Health and Mortality Prevention Surveillance Network. CHAMPS is an effort to understand what’s killing so many children under age five in Sub-Saharan Africa and South Asia. What started as a three-year project has since been extended for another six years, thanks to a $180 million grant from its main funder, the Bill & Melinda Gates Foundation.

“In many of these areas where child mortality is still high, there’s not a very good understanding of why it’s high,” Singletary says. “This initiative works with local ministries of health, non-governmental organizations (NGOs), and other partners to get at the issues. Really understanding the data is critical to finding the right interventions.”

Understanding the leading causes of death for children utilizing the CHAMPS protocol requires huge volumes of data, which need to be tracked all the way from the collection of tissue samples in countries like Bangladesh, Ethiopia, and Mali, through the lab testing process, to the Centers for Disease Control and Prevention (CDC) in Atlanta. PHII provides all the informatics and IT infrastructure support needed to collect, store, analyze those data, and present them in a standard format to a panel that ultimately determines the cause of death.

“It’s quite an intricate project in terms of bringing together the right technology platforms and talent. We had to recruit an entirely new team for CHAMPS,” Singletary says. “It took four years of hard work from a full-time dedicated team to get where we are now—to have this collection of data from seven sites that can be analyzed to see the real causes of death in the countries we’re working in. It has been phenomenally successful.”

Opening the Door to New Projects

Expanding its capabilities for the CHAMPS project allowed PHII to move into a part of the IT lifecycle it hadn’t previously undertaken. Its newly expanded capabilities attracted the attention of USAID, one of the world’s leading international development and humanitarian agencies. USAID brought PHII on board to modernize its neglected tropical disease (NTD) monitoring and evaluation database and operate its NTD data center. “Had we not expanded our staff capabilities and proved that we were able to step into that role and deliver, USAID may not have been a possibility for us,” Singletary says.

Landing the USAID project is one in a string of successes Singletary has logged in her short three-and-a-half years directing PHII. She’s also increased the annual revenue for the organization and recruited and retained top-notch talent. Much of the expansion Singletary has led for PHII has been into innovative and uncharted territory, like the Digital Bridge project, which brings together key stakeholders in health care, public health, and health information technology to create a more seamless exchange of information between health care providers and public health officials. PHII was an integral part of Digital Bridge’s first use case, developing a more streamlined approach to transmitting electronic case reports (eCRs) from the electronic health record (EHR) to public health agencies for their review and action.

“This is one of the first projects of its kind that PHII has ever led,” Singletary says. “To be trusted to do something like this by a brand-new client says a lot about our organization’s reputation and ability to deliver.”