Eliminating Trachoma in Pictures – People, Partnerships and a Pill 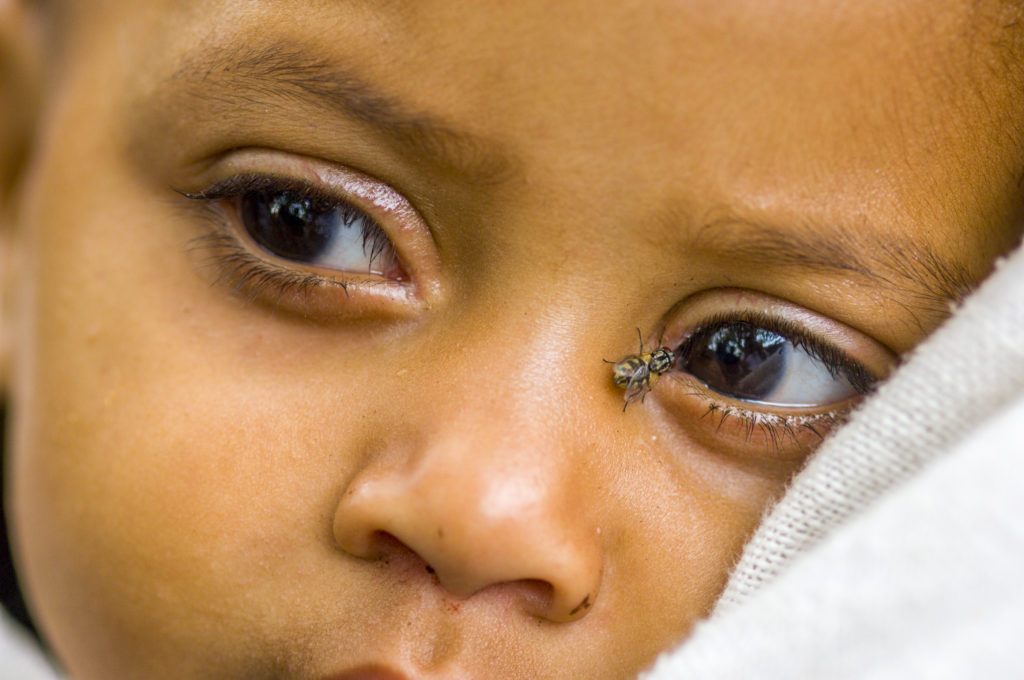 It often starts with a fly. A female Musca sorbens fly, the insect vector of trachoma, lands on a child or adult’s eye to feed on discharge. The bacterial infection spreads through flies that have been in contact with discharge from the eyes or nose of an infected person or via personal contact. Photographer: Louise Gubb for The Carter Center 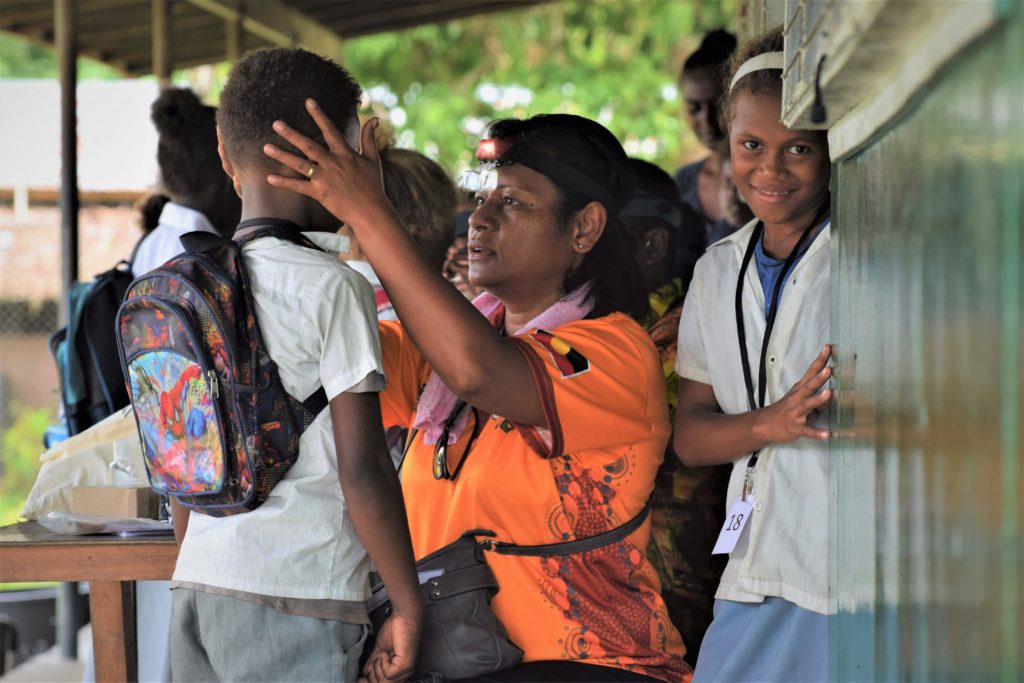 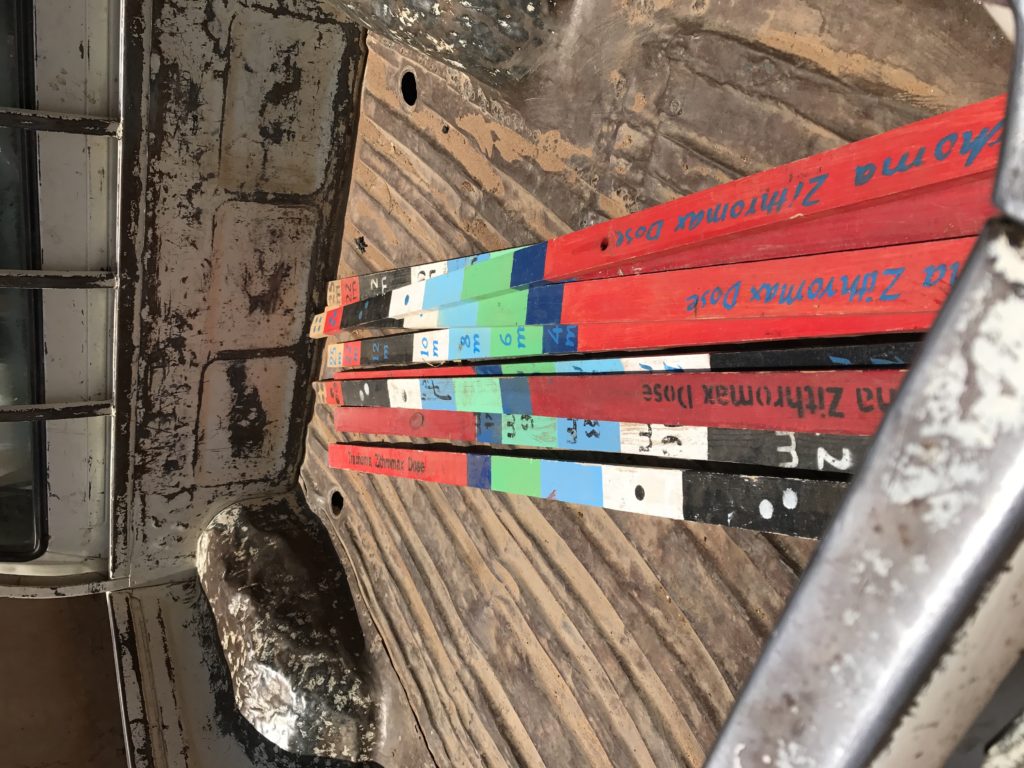 In this age of technology, wooden dose poles are a low-tech but effective way to indicate the correct dose of azithromycin in number of tablets or milliliters of pediatric oral suspension. Height-based dosing is a generally accepted and reliable alternative to weight-based dosing for the antibiotic, when used in mass treatment campaigns in trachoma-endemic countries. Photographer: Simon Bush for Sightsavers 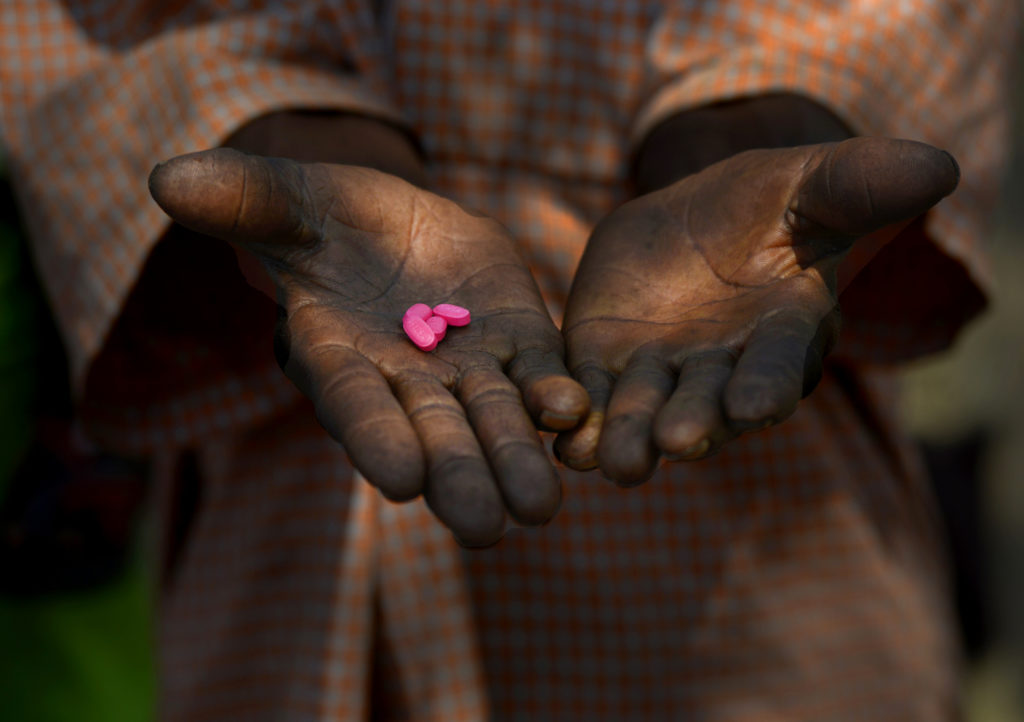 A community member in a village gets antibiotic treatment during a mass drug administration (MDA). Trachoma cannot be eliminated through antibiotic distribution alone. For this reason, national health programs requesting donations of Zithromax® from ITI must demonstrate their ability to utilize the antibiotic as part of a comprehensive trachoma prevention and elimination strategy that includes surgery and environmental improvements to reduce transmission. Photographer: Billy Weeks for The Task Force for Global Health 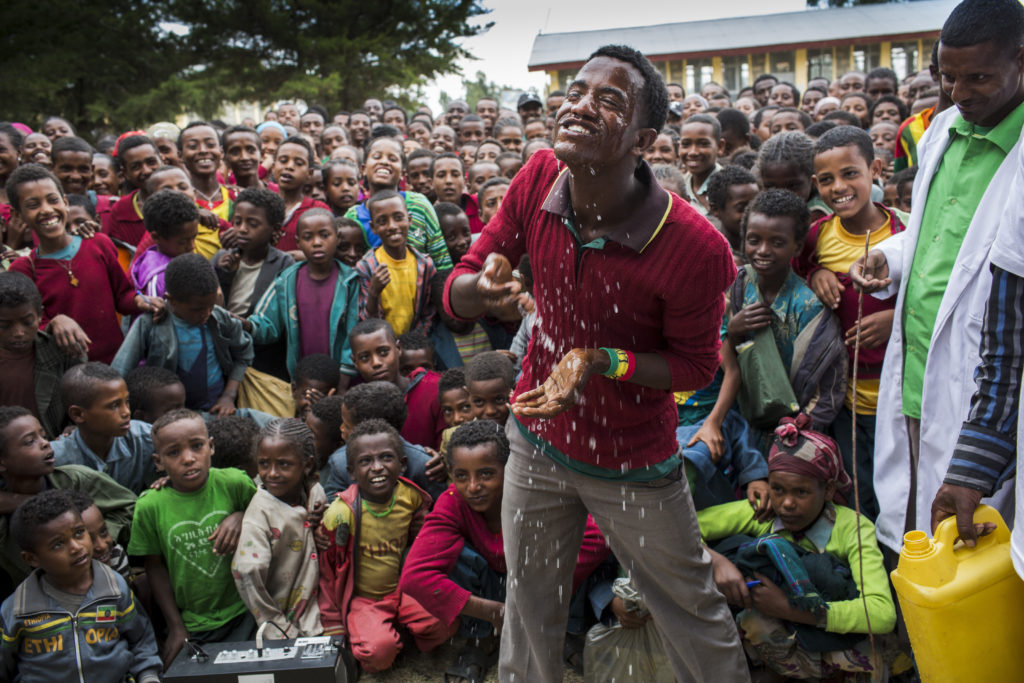 A teacher demonstrates face washing to students at his school. Face washing and access to water and sanitation are important factors in trachoma elimination. Photographer: Michael Amendolia for Fred Hollows Foundation 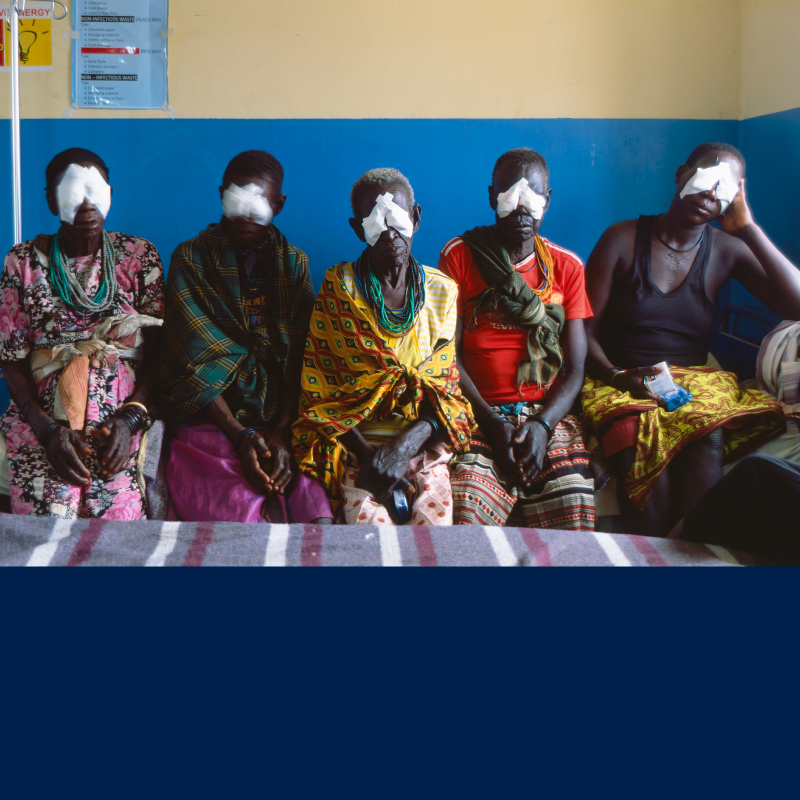 Women wait for their bandages to be removed following surgery for trachoma. Globally, women are at approximately two times greater risk for blindness from trachoma. Trachoma can be treated if caught early but repeated infections with no treatment causes scarring inside the eyelid and leads to a painful condition called trichiasis – and eventually, blindness. Surgery is the only way to reverse trichiasis. Photographer: Simon Townsley 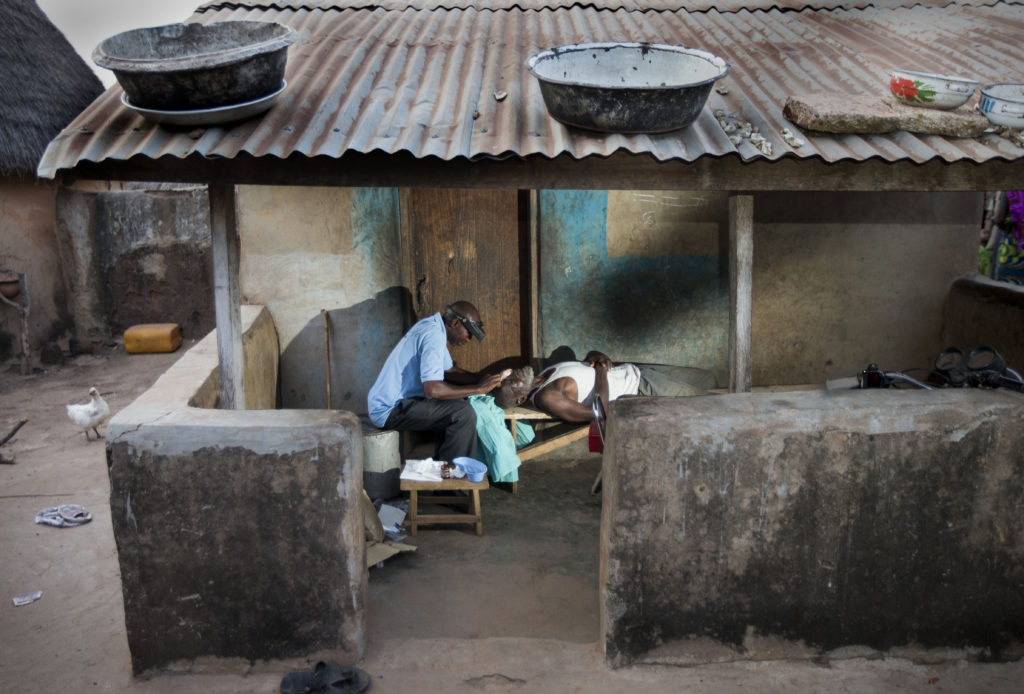 A trichiasis patient receives surgery outside his house at his village. Ghana successfully eliminated trachoma in June. Photographer: Peter Nicholls for Sightsavers 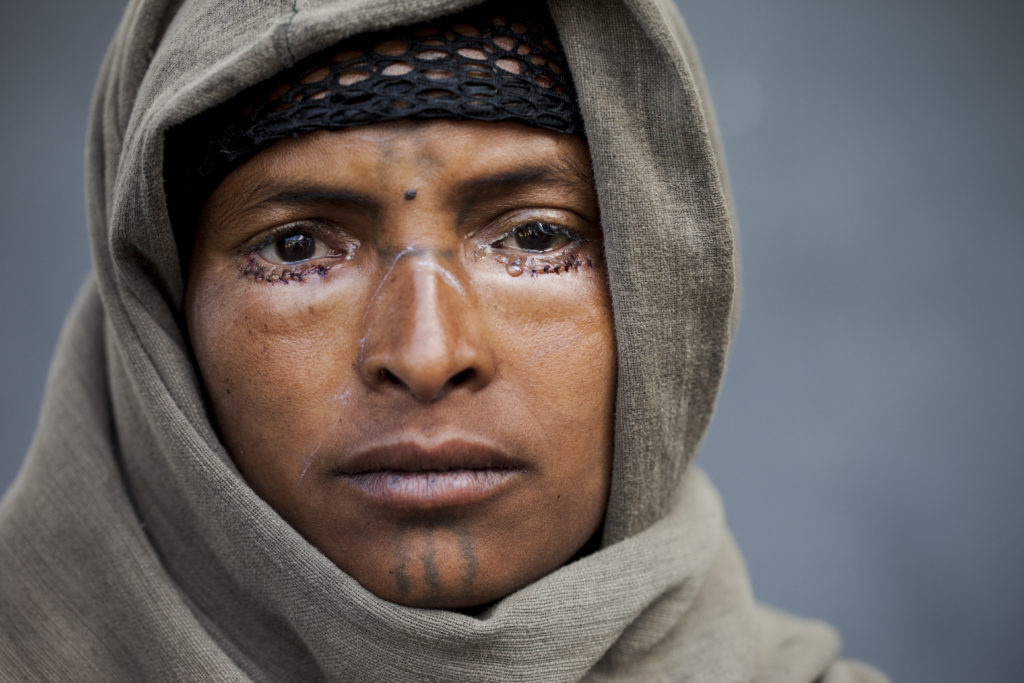 Azmera, a 25-year-old woman, had rare bilateral lower lid trichiasis surgery that successfully averted her risk of blindness. Azmera had been experiencing pain for six years and had used forceps to pull out her eyelashes. “I thought I was going to go blind one day…when the patch was removed and I could see without pain, I was extremely happy,” she said. Photographer: Michael Amendolia for Fred Hollows Foundation. 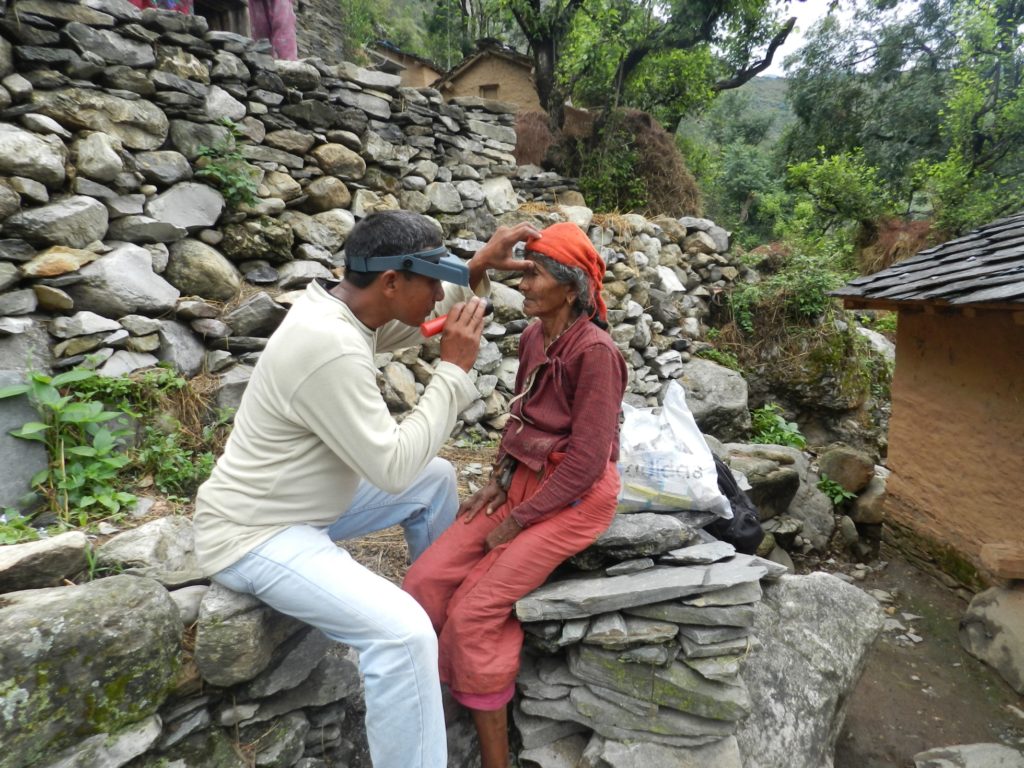 An elderly woman being assessed for trichiasis in one of the last trachoma prevalence surveys in Nepal. The World Health Organization validated the elimination of trachoma as a public health problem in Nepal in May 2018. Photographer: Shekhar Sharma for Nepal Netra Jyoti Sangh

When The Task Force’s International Trachoma Initiative (ITI) began in 1998, there were large knowledge gaps in the transmission and control of the disease. ITI knew that people were going blind from an ancient scourge; that simple public health interventions could prevent blindness from trachoma; and that it had a powerful tool at its disposal in the form of Zithromax®, the antibiotic donated by Pfizer to prevent and treat trachoma — but not much more.

Since then, significant inroads have been made to eliminate trachoma, the world’s leading infectious cause of blindness. ITI has managed the donation of nearly 750 treatments to 40 countries and supported innovations that have helped it understand or determine where to work and who is at risk. The program has been an extraordinary success. Seven countries have eliminated trachoma so far and globally, the number of people at risk for trachoma has fallen by 60 percent.

ITI recently celebrated its 20th anniversary, and as part of a series of year-long celebration invited photo submissions from around the world with the theme of “Humans Against Trachoma.” The slideshow is a sampling of some of the photos submitted.

Masterclass Series: ‘Leading and Managing in a Crisis’

By Andi Kezh, Task Force Intern The COVID-19 pandemic has made clear just how essential